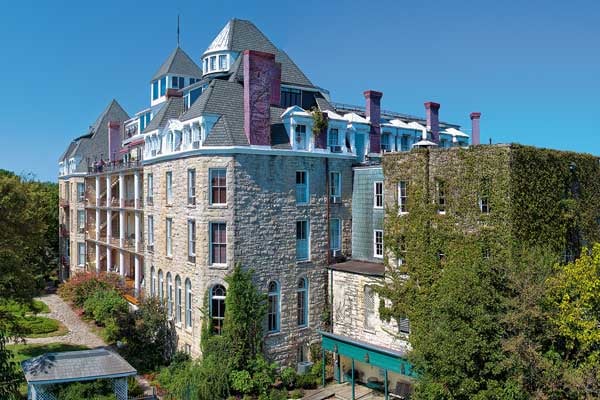 In 1929 Norman Baker opened up a cancer center in Muscatine, Iowa to treat those who had been diagnosed with terminal brain cancer. The following year over 17,000 people showed up in a nearby park to watch Baker cut part of a man’s skull away so he would pour his miracle life-saving tonic directly onto the brain. Sadly, Baker’s concoction of clover, corn silk, watermelon seeds and water didn’t cure the man’s cancer. It only got infected and he died a short time later.

After it was discovered that Baker had no medical training, he was run out of Iowa and he fled to Eureka Springs, Arkansas. While he was there, Baker stumbled onto the floundering Crescent Hotel. The conman bought it and turned it into a hospital.
Desperate cancer patients came from all over the country in hopes of being cured by “Doctor” Baker. Instead, he tried to cure them with his homemade remedies that in some cases only made things worse. Things got so bad that Baker had to lock many of his patients in their rooms until they eventually died from the cancer or his crackpot treatments.

Years later crews renovating the hotel would accidentally stumbled across human remains of Baker’s patients hidden inside the walls of the old hospital.

Today the Crescent Hotel is one of the finest hotels in the Ozarks. It’s also one of the most haunted too. Staff members and guests have claimed to see numerous entities wearing clothing from another time walking around the building as well as the hotel grounds. In fact, an older lady named “Theodra” has been spotted in Room 419 as well as the hallway. However, Theodra isn’t scary. She’s actually quite helpful and has been known to clean up after some of the guests who leave their room a mess.