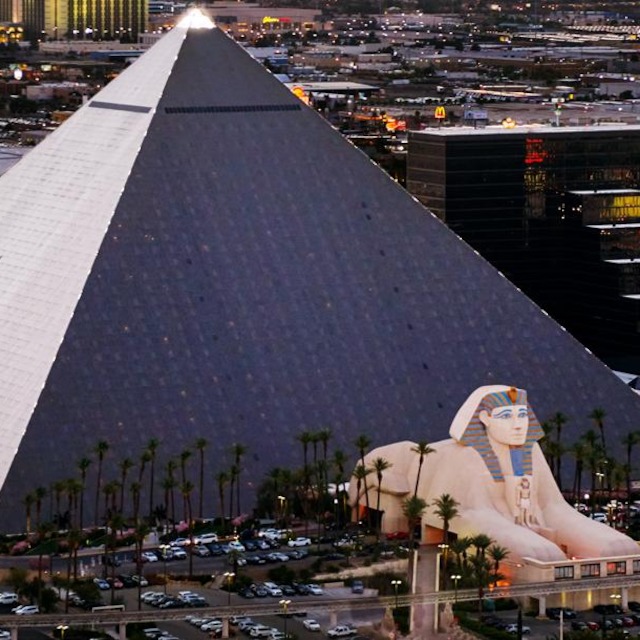 Driving down Las Vegas Boulevard you can’t miss the 350 feet tall black pyramid and 10 story tall Sphinx rising out of the desert. The casino and resort with an Egyptian style themed hotel consists of 4,407 rooms, 29 retail shops, 4 swimming pools and a wedding chapel. When it opened in 1993 the Luxor’s 29 million square cubic foot atrium was the world’s largest It also had the worlds largest beam of light shooting into the sky. Technically, the Luxor is the third largest pyramid in the world, just behind two of the pyramids in Giza, Egypt.

The Luxor cost $375 million to build and crews constantly ran into problems during construction. In fact, some locals believed the project was cursed and that is due to bad luck or bad design. It’s believed that two Sphinx were needed for a pyramid. Everyone knows you can’t have just one side of the pyramid guarded by a giant mythical stone creature with the head of a human, and the body of a lion.

According to legend, it is believed that pyramids in Ancient Egypt required a Sphinx to be facing both directions so that the pyramid was protected from evil on both sides. The sphinx at the Luxor is facing to the east, which leaves the west side vulnerable to evil spirits.

There is also a theory that the shape of the giant black pyramid attracts dark energy to it.

Whatever the legend is, several construction workers were injured while the hotel and casino were being built. Three of them even died.

When the Luxor finally opened in 1993, people checking into Luxor had to ride a boat on an artificial river to get from the check-in desk to the elevator for the rooms. But as wait times got exceptionally long the river ride was abandoned and the hotel went to a more traditional check in process.

Luxor is best known for having some strange, yet popular exhibits such as Bodies and the Titanic in the second floor exhibit halls. The Bodies exhibit is fairly odd but features preserved human remains put on display where people can get an up close and personal look at the muscular, nervous, respiratory, circulatory, digestive and skeletal systems of human beings.

The “Titanic: The Artifact Exhibition” features 250 authentic artifacts recovered from the wreck site of the Titanic, as well as extensive recreations of some of the most famous rooms from the Ship.

In addition to the casino and sports book, the Luxor also features the Tender Steakhouse and an incredible buffet. There’s also a Starbucks onsite too, which I know Chelsie really appreciated the morning after a long night in Vegas.

Despite food, fun and entertainment there has been a lot of tragedy in the resort as suicides tend to happen every so often. In September 1996 a prostitute who had recently restive positive for HIV was seen sitting on the railing on the 26th floor. Guests tried to talk her out of jumping but the weight of the disease was too much for her to bare. She closed her eyes and plummeted over 250 feet into the entrance of the buffet area.

A few years later another woman jumped to her death from the tenth floor in the middle of the afternoon. You can imagine the surprise of some of the guests checking in when they hear a loud noise and look down to see blood splattered on their clothes with the remains of a young lady nearby.

On May 7, 2007, Luxor was the scene of the explosion when someone placed a homemade bomb in a coffee cup and placed it on a car of an employ who had parked in the hotel parking garage. One casino employee was killed from shrapnel when it exploded.

Three years later, a UNLV football player who had been taking drugs earlier in the day tried to intervene when he witnessed an amateur MMA fighter get into an altercation with his girlfriend. Though the football player’s intentions were good, he found himself in a fight and was overmatched. He wound up bloody and unconscious on the floor. medics did all they could, but the college football plater never woke up and expired there in the resort.

In 2011, Legionnaires disease which is caused from potentially deadly bacteria in drinking water was traced to the hotel as three guests became very ill. One of them eventually died in January 2012. The hotel began extensive treatment of their water and it hasn’t been an issue since.

Also in 2012, a serviceman in the Air Force got into a fight with a colleague in the first-floor lobby of the Luxor’s west tower. The colleague pushed the airman against an elevator door, which to both men’s surprise opened up. The serviceman fell 25 feet down the empty shaft to the basement level. He was taken to the hospital in critical condition and later died of his injuries.

That same year a casino employee was murdered by their boyfriend in the lobby. He then killed himself. Unfortunately, it was very grizzly and public so it has left a scar on the mood of that area of the casino.

Luxor is said to be the most haunted hotel on the Vegas strip. And when you think about it, there’s a lot of good reasons besides all of the deaths that occurred there on the property. The Bodies exhibit in the resort has showcased the remains of thousands of cadavers over the years. You have to think at least one of those people aren’t too happy with their remains being put on display for someone else’s entertainment.

The Titanic exhibit also is rumored to be haunted by some of the people who may be attached to some of the items there on display. Staff members who have worked on the second floor have heard doors opening and closing at odd hours. Some have even seen transparent entities in old, out of date clothing walking around the exhibit late at night. Whenever Luxor employees walk up to them or try to get their attention, the spirits fade away right in front of their eyes.

In addition to the exhibits, it’s been rumored that the Luxor was built on top of an old mafia burying ground. Back in the 1960s and 70s the part of Las Vegas Boulevard where Luxor is located was just another part of the dessert where members of the mob would dump the remains of people who crossed them or owed the money.

The 12th, 13th and 14th floor are supposedly most haunted parts of Luxor. Guests and hotel staff have seen the apparition of a woman from time to time roaming the hallways. Sometimes she will make her way into guests rooms. People who have stayed in the hotel have heard footsteps waling around the room at night. On occasion she has been known to move things around. She’s even been known to go through suitcases and shuffle clothing and other items around.

We mentioned the old Nile River ride earlier that took guests to the front desk. According to Luxor staff members it was done away with because it created a logjam and long wait times for guests who wanted to check in.

Well, after the check in process was changed, Luxor officials decided to make the river ride into an attraction. But that only lasted a few years. The problem was, Luxor guests began seeing the apparitions of three men as they went through a dark tunnel in the resort. It’s believed that the three spirits were the construction workers who died on the property while building the resort.

As one of the premier casinos and resorts in Las Vegas, the Luxor is also one of the most haunted. Built on a supposed mobster burial ground, the hotel is said to be cursed. From suicides to bombs in the parking garage, the Luxor has seen its fair share of death. Join us as we…